The Gilded Years by Karen Tanabe

Anita Hemmings is a senior at Vassar in 1897, a gifted Greek and Latin scholar, a beautiful soprano in the Glee Club, a fierce debater, voted most beautiful in her class, and roommate to one of the most popular (and wealthiest) students.  We learn that Anita is passing as white to attend Vassar, as African-Americans are not allowed as students at Vassar.  Wellesley and Radcliffe admit African Americans, and in fact, one of Anita’s friends from home in Roxbury, Massachusetts attends Wellesley.

Here is Anita during her Vassar days. 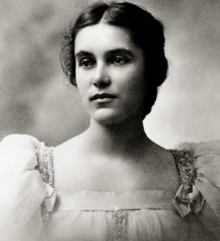 The Gilded Years recounts Anita’s senior year, her desires and goals for future studies, and always the underlying anxiety about being discovered. She is outed near the end of the book, but I won’t tell you who discovers her secret or the ramifications of this big reveal. The article below is just the kind of notice Anita feared her classmates or professors might see. The Gilded Years is very enjoyable historical fiction, and a quick read.  What makes it stand out for me is that the author is a Vassar alum and Anita Hemmings was a real person.  Despite a great deal of research, there is limited information about her, which, as the author notes in her afterword, makes her story a perfect candidate for historical fiction.

For more information about Anita Hemmings story, here is an article from the Vassar Magazine: